I have the last three commissions here, and I have been working on them on and off the last couple weeks. As a new-ish artist, I am always discovering new techniques and ways to improve my work.

This "new technique" is one I have never heard of, or seen anyone else use before. It came about from a reference picture of a hoof. The hoof was a shell color with very fine brown lines, some stripes, and a pronounced cornet band. It was exactly what I wanted for this commission. Unfortunately, I have yet to find a small enough brush to get those brown lines fine enough. Perhaps I should just cut a bristle off one of my brushes and use that!

That, however, would take absolute ages, and many mistakes before getting right. There is so much more room for error in that way.

Instead, I remembered way back to when I accidentally used a wet flat brush with pigments. The pigments were very fine and made more brush strokes than regular acrylic paints. Of course, at that time, that is exactly what I did NOT want!

I wanted exactly that for my hooves though! I used a small (size 3 I believe) cheap, flat, Golden Taklon brush with somewhat firm bristles. I first dipped it into my cup of water, dabbed it on a paper towel to remove a majority of the water, and they flicked out the bristles with my finger. This separated all the bristles and got the rest of the extra water off. I then dusted the top of my pigment jar with the desired pigment color, and dipped the tip of the bristles in the pigment so only the very ends of the bristles had a tiny bit of pigment. Because the brush was still a bit went, the pigments became more of a paste than a powder. I then brushed this on in the direction of the hoof, from top to bottom. It created very thin lines in a diluted version of the pigment color, becoming darker on some lines and lighter on others. A nice variety! I didn't do any horizontal stripes, I thought it would look too busy and "over done". If you water down the pigments even more, you might be able to add some horizontal growth lines without it looking over-done. Or, you could only do horizontal stripes! I guess it just depends on the reference and look you are trying to achieve.

This is the result: 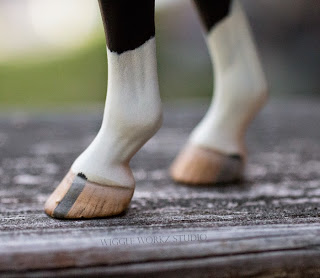 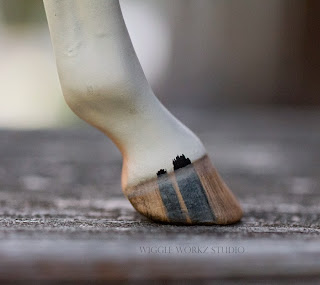 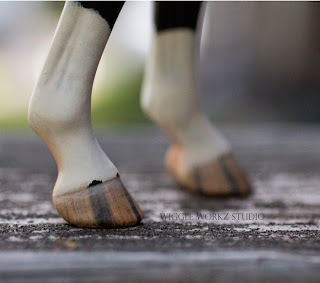 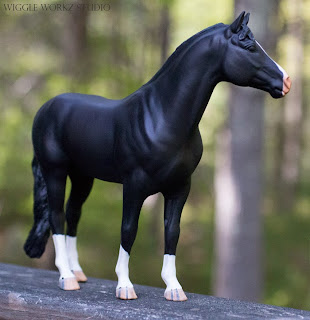 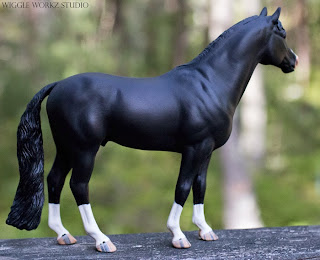 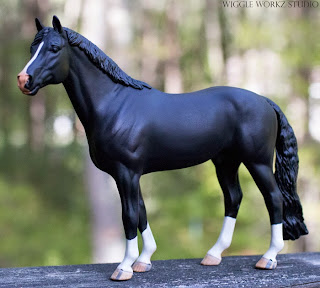 (Excuse the uneven hooves, the surface he is on it not flat!)

He would look fabulous with metal horse shows, but that's not part of the order. He is a fancy barefoot warmblood! He will get his touch-ups and the rest of his details later today. Definitely one of the snazziest I've done!